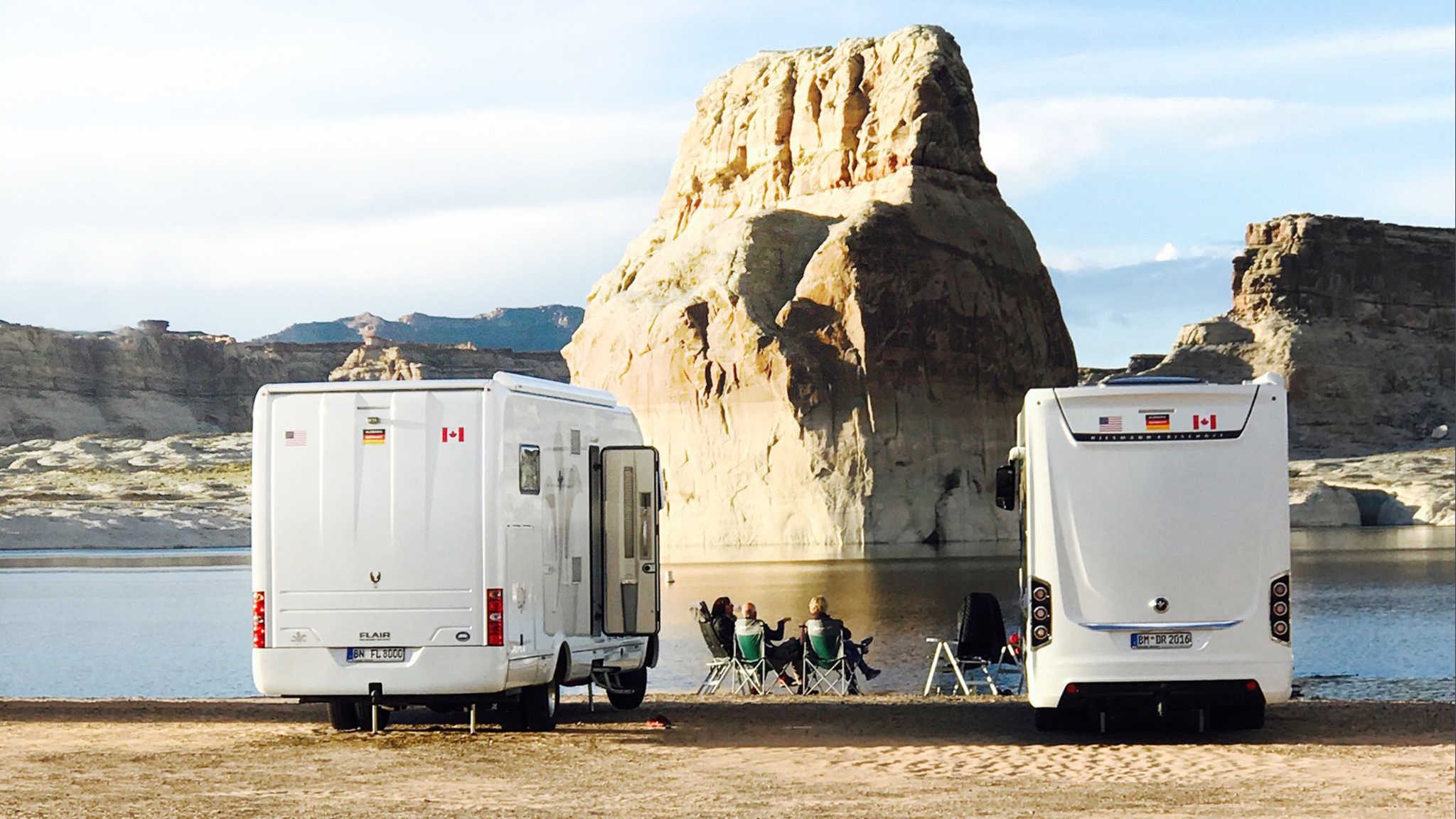 Exploring the USA with Flair Dream Team on a Dream Tour

Through the USA and Canada in 225 days: Renate Treis and Dieter Haase have travelled in their Flair and with Anne Falter-Leitzen and Werner Leitzen on a dream road trip, and are enjoying the feeling of freedom – wherever, whenever.

Since the 1970’s, when Michael Douglas and Karl Malden hunted criminals there; and even before then, when Scott McKenzie performed songs in for several years in this city, Renate Treis had one big desire: to see San Francisco once in her life! It was to be almost 50 years until she was able to view the former capital city of the flower power movement for the first time. “Simply breath-taking”, she says, and doesn’t just mean the Golden Gate bridge and the cable cars. She is also enchanted by the 43 hills, the spectacular views onto the Californian metropolis, the ocean and the bay: “There can hardly be another place in this world which casts such a spell on people”.

And she hasn’t just fulfilled her long-desired dream of seeing San Francisco. Since March 2017, Renate Treis and her husband Dieter Haase have been travelling through the USA. The two retired federal officials are travelling in a motorhome – a Flair 920 LE. The couple from Brühl near Cologne has long had a great passion for motorhomes. “Dieter has loved them for 40 years. When we got to know each other, he quickly also got me interested in them”, remembers Renate Treis, who originates from a family of vintners based on the Mosel river. In 2007 – already facing their retirement, and packed with a small inheritance and a wish to travel – the two of them purchased their first mode of transport: the “Flair 1”, amongst other things selected because Renate found its name simply inspiring. And in this way, the two became the “dream team on tour”.

The years that followed were filled with many tours throughout Germany (north to south), Portugal, Spain, the south of France, Scotland, Ireland, Tuscany and the Netherlands. “Unconventional freedom, always being at home, meeting nice people and making spontaneous decisions” says Dieter Haase of his lifestyle when underway in his motorhome. Having been so strongly infected with the motorhome owner virus, in 2017 the big decision was made, and off they went to their overseas destination. “A trusting relationship has developed due to the competent, customer-friendly support from Niesmann + Bischoff, our location close to the plant and the helpful Service Team there”, says Renate Treis. All this is reason enough to dare to “conquer” the North American continent with the Flair, in the meantime with model number three. In addition, the comfortable interior fittings offered by the Liner was another important criterion. The stimulus for the almost eight-month journey came from Anne Falter-Leitzen and Werner Leitzen, also members of the NBEC Club (Niesmann+Bischoff Owners’ Club) and the “ArtoFlair friends”. “Both of these have frequently travelled in the USA and Canada in rental vehicles. At some point, Werner told us that they were planning a journey in the USA with their own motorhome”, remembers Renate Treis. “And we spontaneously decided to go with them”!

Taking the Flair to Baltimore by ship

The preparations take more than a year. The “hot phase” starts at the beginning of 2017. The couple’s friend Werner meticulously plans the route due to his travel experience and familiarity with the USA, and books the highly popular “hot spots” (e.g. camping grounds and ferries) in the USA, Canada and Alaska. This results in a two-volume roadbook, supplemented through Internet research by Renate Treis and Dieter Haase on entry conditions, insurances and transport. The Flairs go on board the “Atlantik Star”, one of the largest container ships in the world, in Antwerp in February, and are shipped to Baltimore. The four friends take the aeroplane on 10th March, and land in heavy snowfall in New York. After almost ten days spent waiting for their motorhomes due to a ferry delay, involving an unplanned flat-sharing community in a mini-apartment and a stay at a farm owned by the shy Amish people in Pennsylvania, the Germans finally start the first stage of their journey on 22nd March, heading for Virginia, and North and South Carolina. 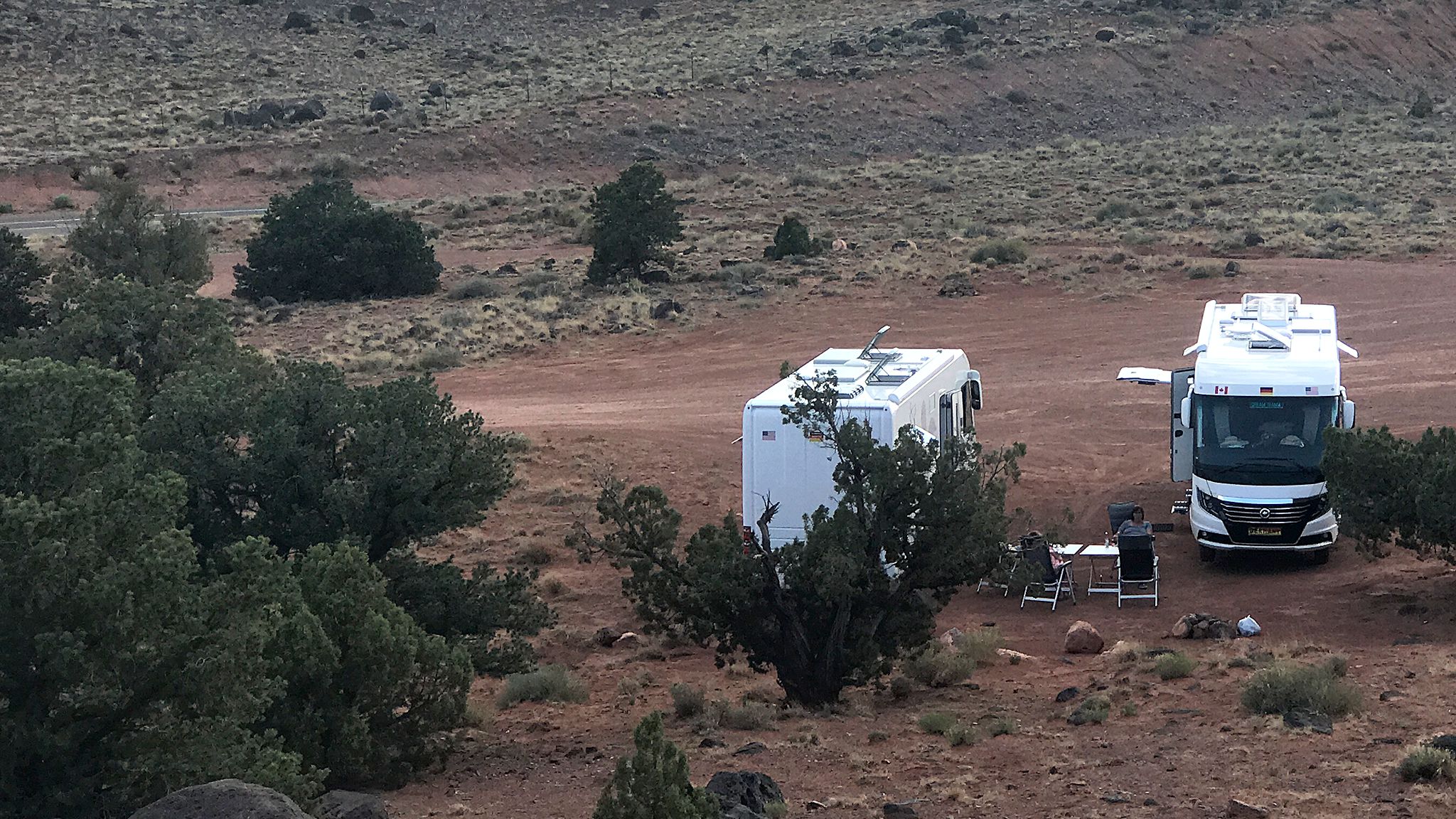 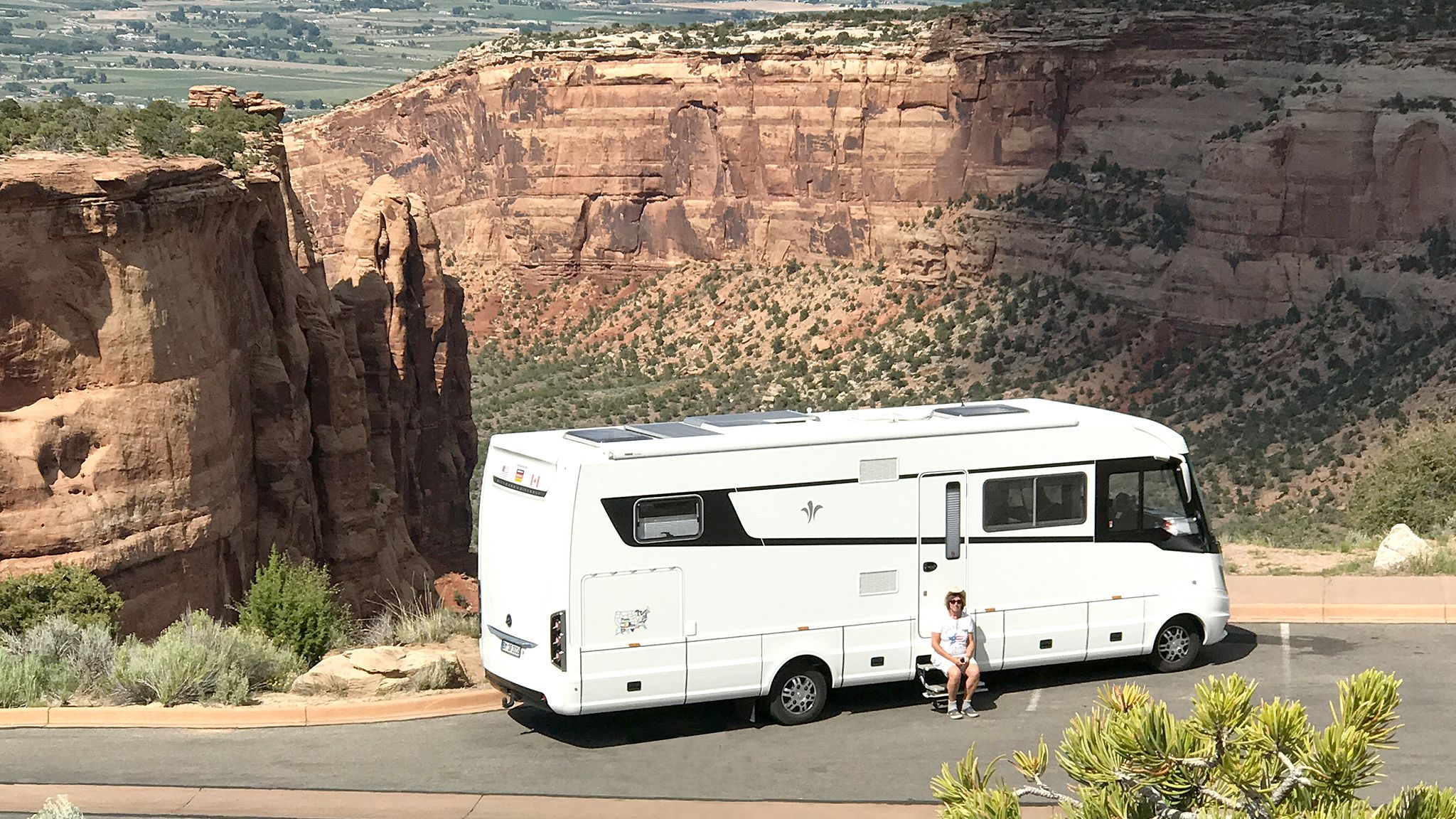 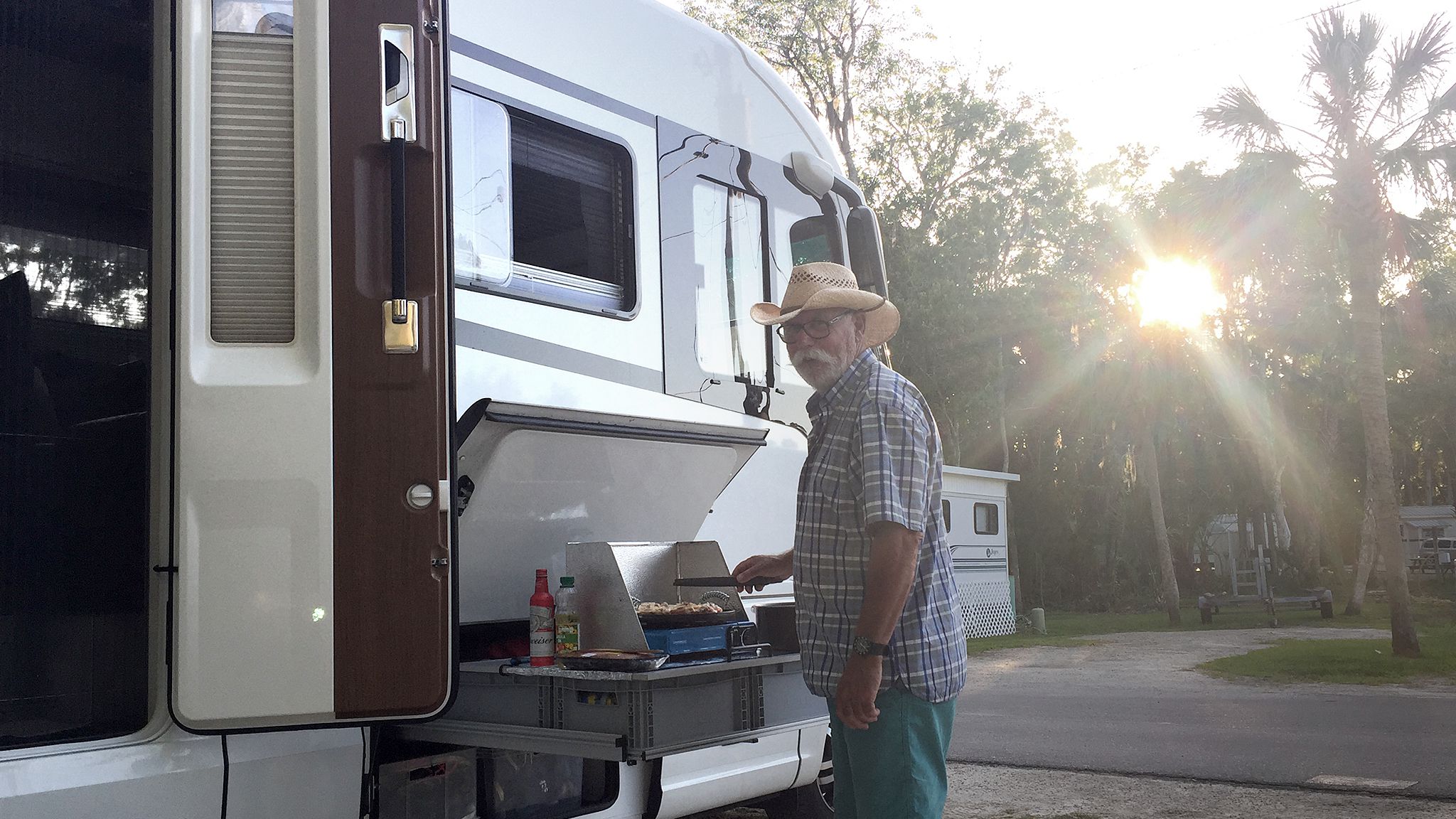 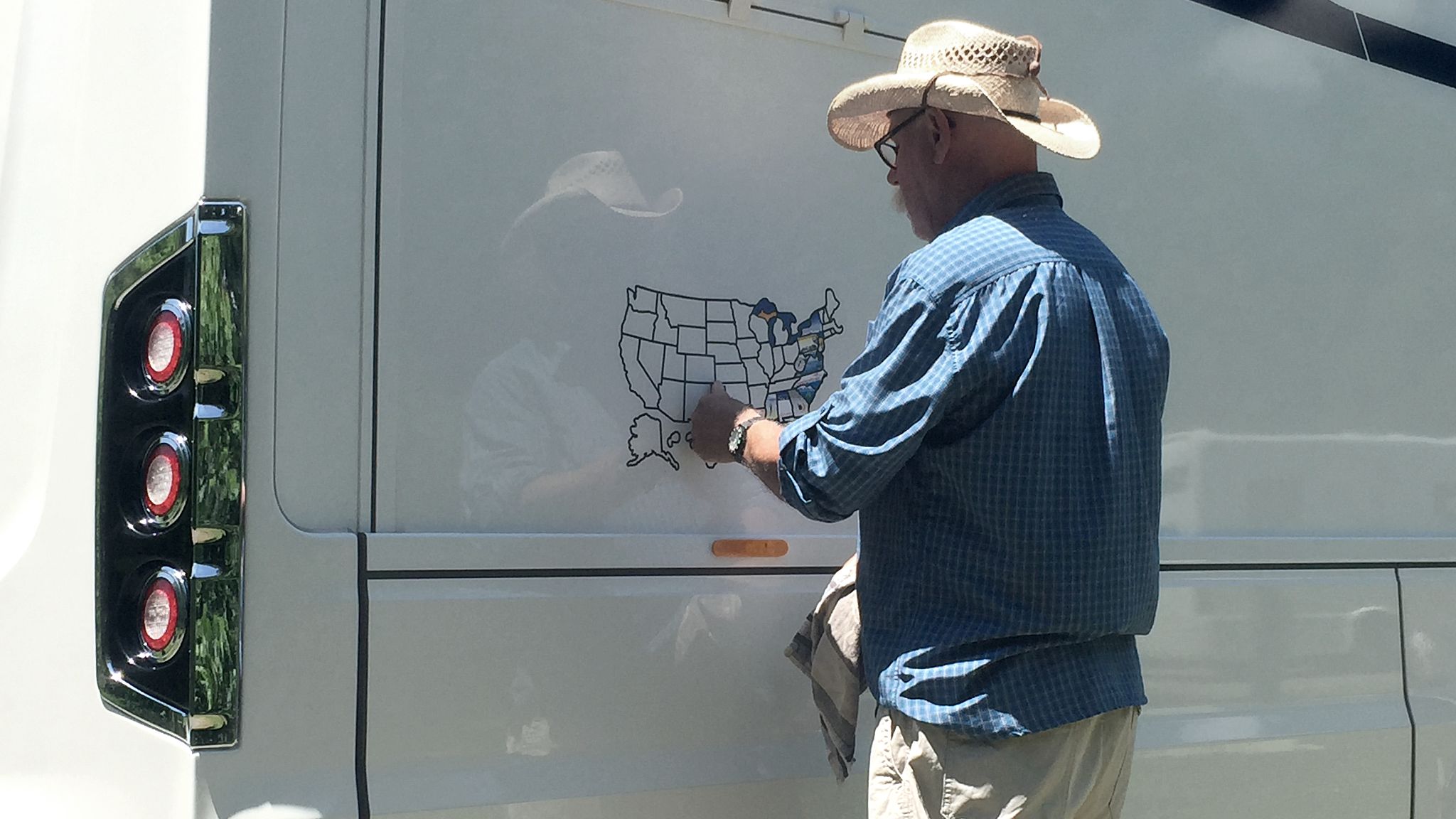 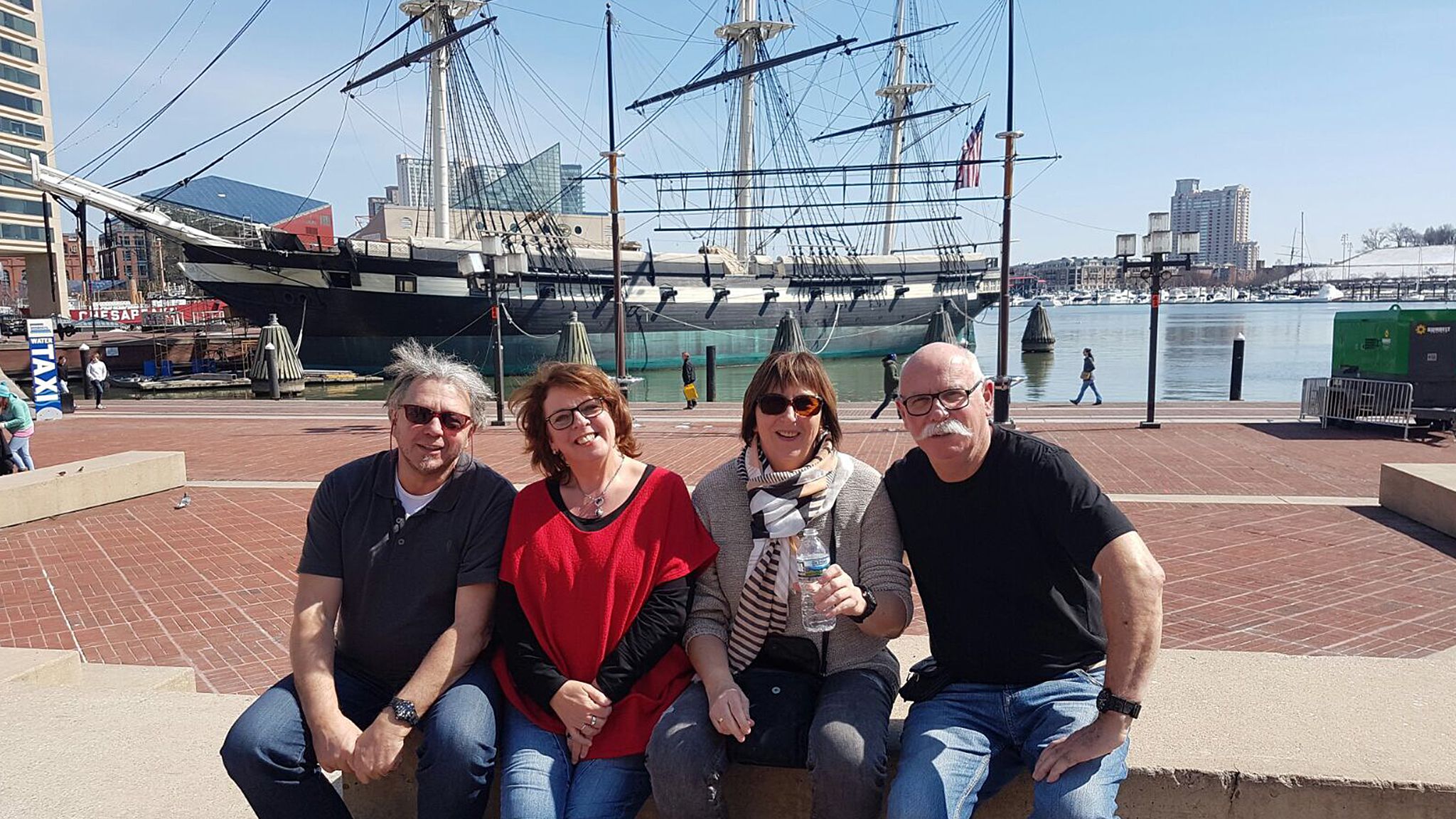 Since then, the Rhenish couple have travelled thousands of kilometres along the roads of North America – sometimes in snow and icy temperatures, on broad highways, over mountain passes, then back onto narrow, curving routes, on which Dieter Haase comes into his own at the steering wheel of the dream Liner. Stickers on the USA map hung on the garage door of their motorhome show which federal state the adventurers are currently visiting. Their journey has led them around this huge country, through national parks with breath-taking flora and fauna, to the indescribable scenery of the Grand Canyon, to New Mexico, to sunny Florida, to the smallest post office in the world measuring only five m2 in the Everglades, to surfer paradises and to the dream coast of Oregon. And everywhere they explore cities and landscapes, with and without a motor scooter, with great passion. For some stages of the journey, Renate Treis and Dieter Haase travel alone, and then their friends Anne and Werner meet them somewhere for the next stage. The amount of things they have seen is unbelievable. Often, they feel simply enchanted by the whole experience. The couple are repeatedly greatly impressed by what they see – for example also by an evening visit from a raccoon in the Evergreen State of Washington, which almost pattered its way into the motorhome on the lookout for anything edible.

No neighbours for many kilometres

Renate Treis and Dieter Haase also tell of surprising encounters with people, sometimes in the middle of nowhere. “Once, on entering a national park, the terrain to the left and right of the road was already a swamp, and the trees stood with their roots in the water”, reported the 67-year old. “We asked ourselves how it is possible to live here at all”, In the supermarket, the Germans were approached by a lady. “She had been listening to what we were saying”, adds Renate Treis. This lady originally came from Mainz; her Rhenish-Hesse dialect was still clearly audible. She fell in love with a her husband and moved to the USA to be with him. “She told us that it is of course possible to live there”. But when you don’t see neighbours for kilometres on end …

Following their travel planning, the four motorhome owners from the Rhineland left the USA at the beginning of July, and made their way to Vancouver/Canada. What other things do they remember about the USA after almost four months? Multiple apologies for the current president, that services “standing in line” usually take a long time, that a lot of patience is required at train crossings, that Americans do possess a certain love of rules, and an unmistakeable gap between the rich and the poor. Now their trip – once again together with Anne and Werner – is to take them to Vancouver Island (British Columbia), to Alaska, to Watson Lake, to Dawson Creek and to the Jasper national park. Later they are intending to travel in the direction of Chicago, Niagara Falls, into the New England states for the “Indian summer”, and perhaps via Halifax back to Antwerp. By then, it will be November, and this unforgettable tour will have come to an end after approximately 225 days. And yet Renate Treis and Dieter Haase will not be finished with their Flair by any means. Their next travel destination has already been decided: Australia and New Zealand.

Part II On the Road with Marygold (Arto 85 E, Face to Face)

Mobilehome and SUP Off to Cloud Cuckoo Land