Press release Next generation of the Flair

NIESMANN+BISCHOFF redefines the liner class with the Flair 2023

With the next generation of the Flair, Niesmann+Bischoff has developed a premium liner that takes interior design to a whole new level – combined with technology of the highest quality. The customisation options for customers know no bounds.

Polch, 7 July 2022 – Supreme quality from the outside, but the real surprise is waiting inside: Niesmann+Bischoff is setting completely new standards for the interior of the Flair 2023. The style is modern, clean, timeless and minimalistic, but without compromising on design, materials or cosiness. “We have completely redefined the interior design for the new Flair. With new materials, a new design language and a new architecture – but combined with the very best liner technology,” says Managing Director Hubert Brandl. He and his team have spent roughly two years on the development process, resulting in an explosion of innovative ideas. As a consequence, the motorhome is available in an almost infinite number of different configurations, enabling customers to make their dream premium liner a reality.

The new Flair will be available to order following its world premiere on 8 July 2022. By the end of August, it will be possible to take a tour of the first prototypes at this year’s Caravan Salon in Düsseldorf (26 August to 4 September 2022), or at dealerships from September.

Next generation of the Flair with an all-new interior design

It is also immediately apparent from the outside that the Flair 2023 is the next generation of the model: the exterior has been given a makeover and significantly improved as a result – it is a liner that will turn heads. The modern, sporty design features straight lines and is modest and simple. The headlights are positioned further apart, while both the daytime running lights and rear lights create a uniform and very distinctive signature look for the vehicle. It is the interior of the motorhome that truly shines, however – the modern interior design is a big change from the more conservative interiors found in previous liner class models. “No other vehicle feels as spacious, uncluttered and peaceful inside,” says Hubert Brandl.

Visually alone, the interior appears surprisingly large as you have a clear line of sight from the cab to the bed at the rear. But it’s not just an optical illusion – the interior is actually far more spacious. The passageway through to the bed is wide, while the hinged table leg and folding table top can be adjusted to make it easy to access the cab from the living space and its cosy face-to-face seating area. Geometric ceiling cabinets provide additional room in the cockpit, without compromising on storage space. Alternatively, however, two extra berths can be accommodated here, with a lifting bed that all but vanishes in the ceiling.

Niesmann+Bischoff has also come up with some tricks to make even better use of the space available in the motorhome. A 32" TV has been built into the furniture between the kitchenette and the living area, for example, which can be raised or lowered at the touch of a button, depending on whether or not it is needed. The speakers are also integrated into the wall lights and in the cab.

When it comes to design, the team from Polch makes use of unusual yet natural materials with an extraordinary touch and feel, the likes of which have never been found in motorhomes before: sliding doors made of smoked glass have a stunning visual impact, while the cabinet surfaces are made of a premium, real wood veneer. In addition to a wall with an innovative concrete effect, the wellness shower is also equipped with a walk-in shower tray made from a solid surface material. What’s more, if desired, anyone who wants to make a real statement in the design of their bathroom can opt for a washbasin made from the patented material Cristalmood by the Italian company Antoniolupi.

Just like the iSmove, the walls in the living area have a felt covering. Aside from creating a truly unique ambience and atmosphere, this also makes the acoustics sound very natural. The iSmove has inspired a number of other changes too: the entire bench seat in the living area can be transformed into two seats with safety belts in one simple step thanks to a swivel mechanism specially developed by Niesmann+Bischoff. The lighting concept has been designed in a way that makes it as intuitive as possible to operate. There are motion and light sensors that will light up the corridor at night. The living area, rear garage and storage compartment for supplies have automatic lights, which are activated when the doors or flaps are opened.

Numerous different configurations for the customer

Although it has been standard in modern home kitchens for many years now, the kitchen area boasts a new design feature that is something of a rarity in motorhomes: the large refrigerator with separate freezer is integrated in the wall unit – as a result, the furniture design is not broken up by the refrigerator door. This makes the living area appear much larger, since the refrigerator and wardrobe form a single unit.

The design can be customised in a number of different ways: with no bearing on the other furnishings, a choice of real wood veneers is available for the wall cabinet in the kitchen and the drawer fronts, including “Walnut planket”, “Breeze Oak” or matt white. A kitchen work surface made from a solid surface material with a stone effect is available with an integrated sink. The kitchen can also be personalised in a variety of ways in terms of its features, giving customers complete freedom, without having to make any compromises. The customer can choose between a dishwasher, oven, an electrically-operated, telescopic cooker hood or a microwave, for example. A cooling drawer in the kitchen unit is also an option – rather than integrating the refrigerator in the wall unit.

An astonishing amount of space has been created underfoot by another new development: all of the vital tanks and smart technology is concealed by a new, highly practical double floor. All of the installations have been completely rearranged with the aim of creating as much storage space as possible, while also making it easier to access. Thanks to the retractable box system, the new space could not be any easier to use.

Other technical innovations make the Flair particularly self-sufficient: the liner is equipped with a 100 Ah lithium battery as standard, for example. The independent power supply can be upped to 6 x 100 Ah – combined with a powerful inverter and charger as well as a battery management system. There is also the choice of a 220 or 440 watt solar energy system. A 370-litre fresh water tank is also fitted on board as standard. In addition, a liner pack can also be ordered, which includes a ceramic toilet with a 200-litre tank along with  electric drain valve, as well as warm water underfloor heating and real glass windows.

Safety first — Unique safety concept for the new Flair too

Iveco’s electronic assistance systems, such as Emergency Brake Assist, Adaptive Cruise Control and the Lane Departure Warning System, offer real added value where safety and comfort are concerned. Niesmann+Bischoff has combined all of these popular options into one single driving safety pack.

The new Flair – just like its predecessor – continues to be the only liner that features airbags, ESP, a seatbelt tensioner and a crash mechanism for the brake. While this has been common in passenger cars for a long time now, in the liner class of fully-integrated motorhomes, this unique safety concept is something of a unique selling point for the Flair. 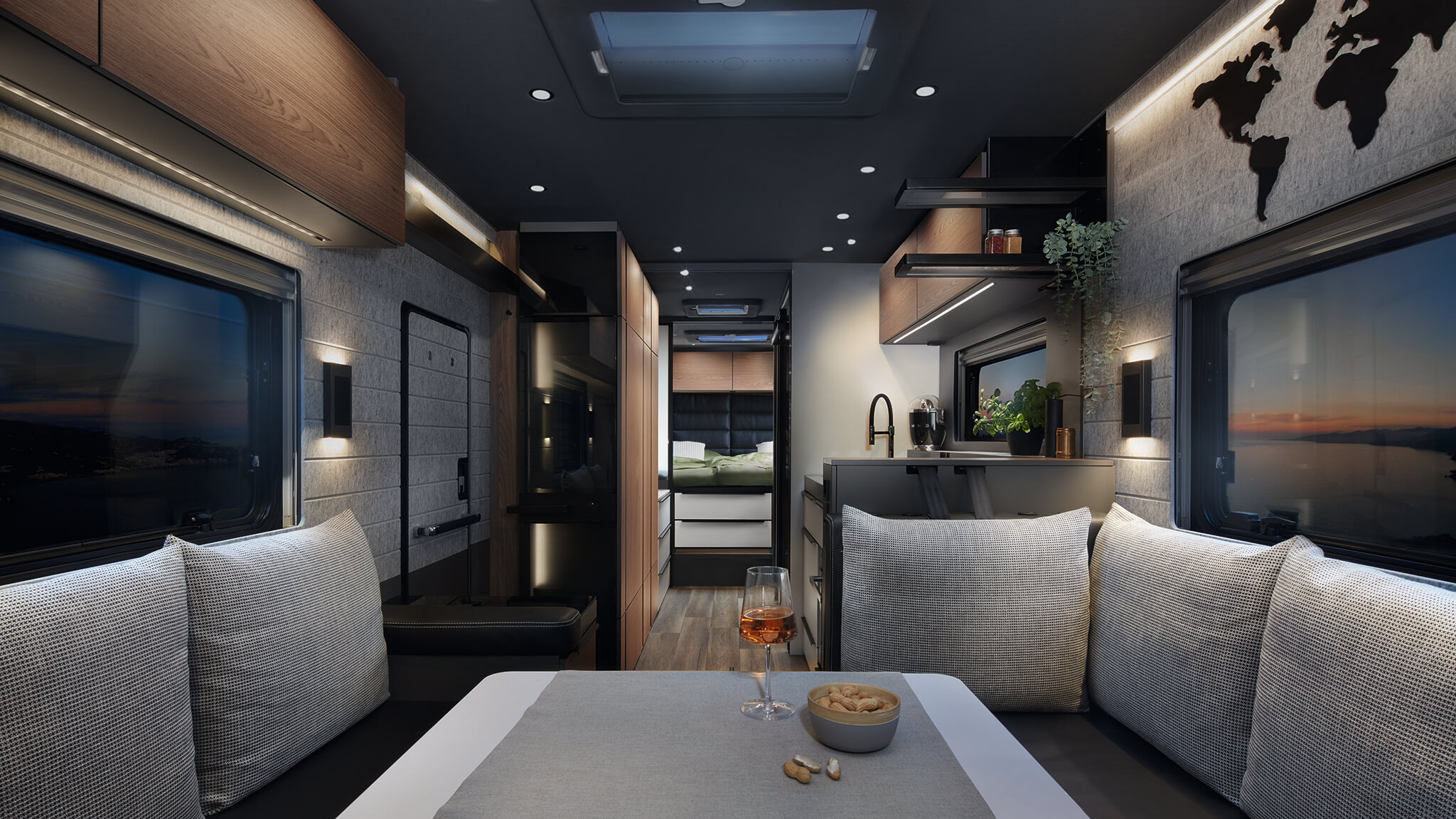 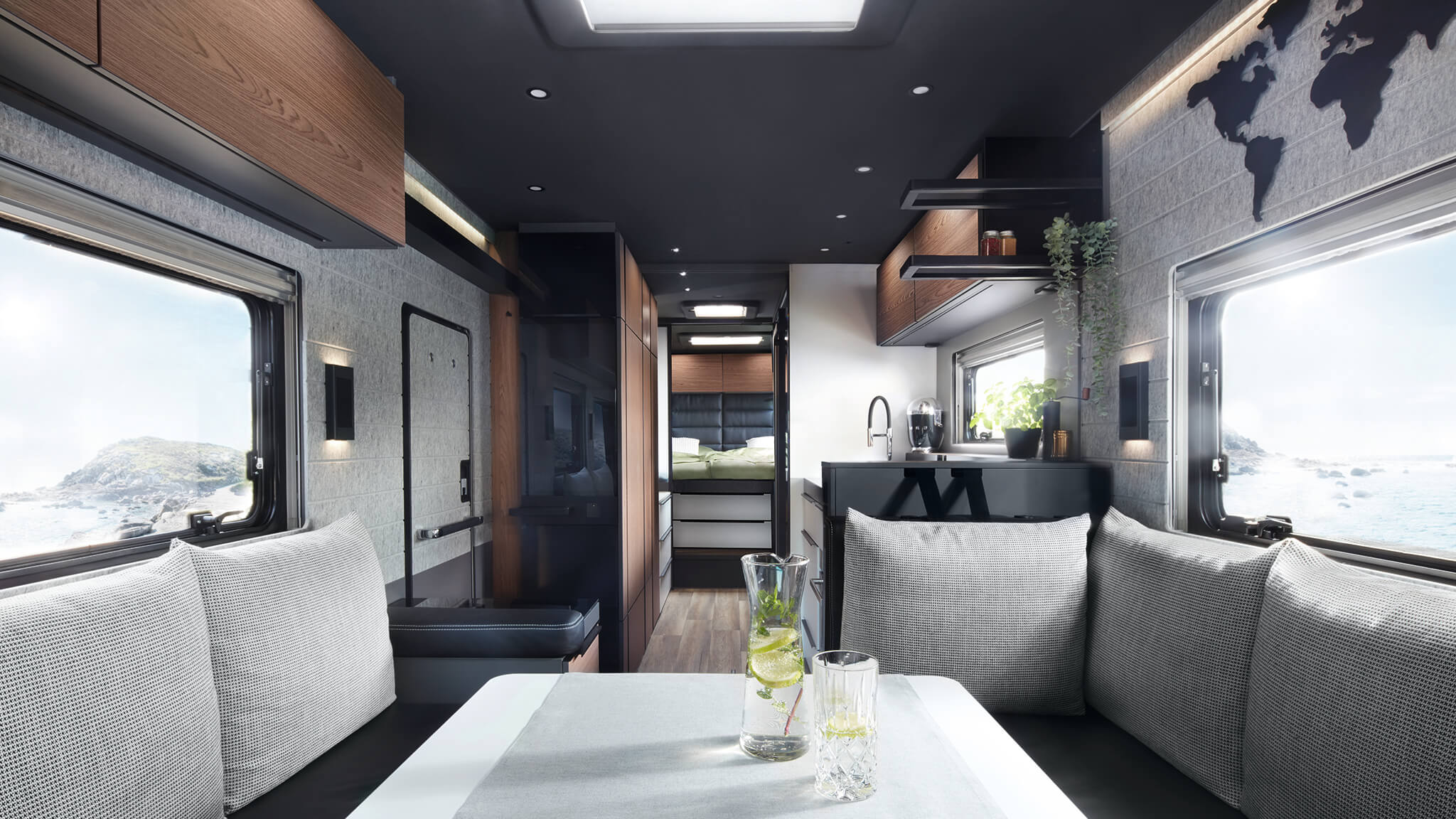 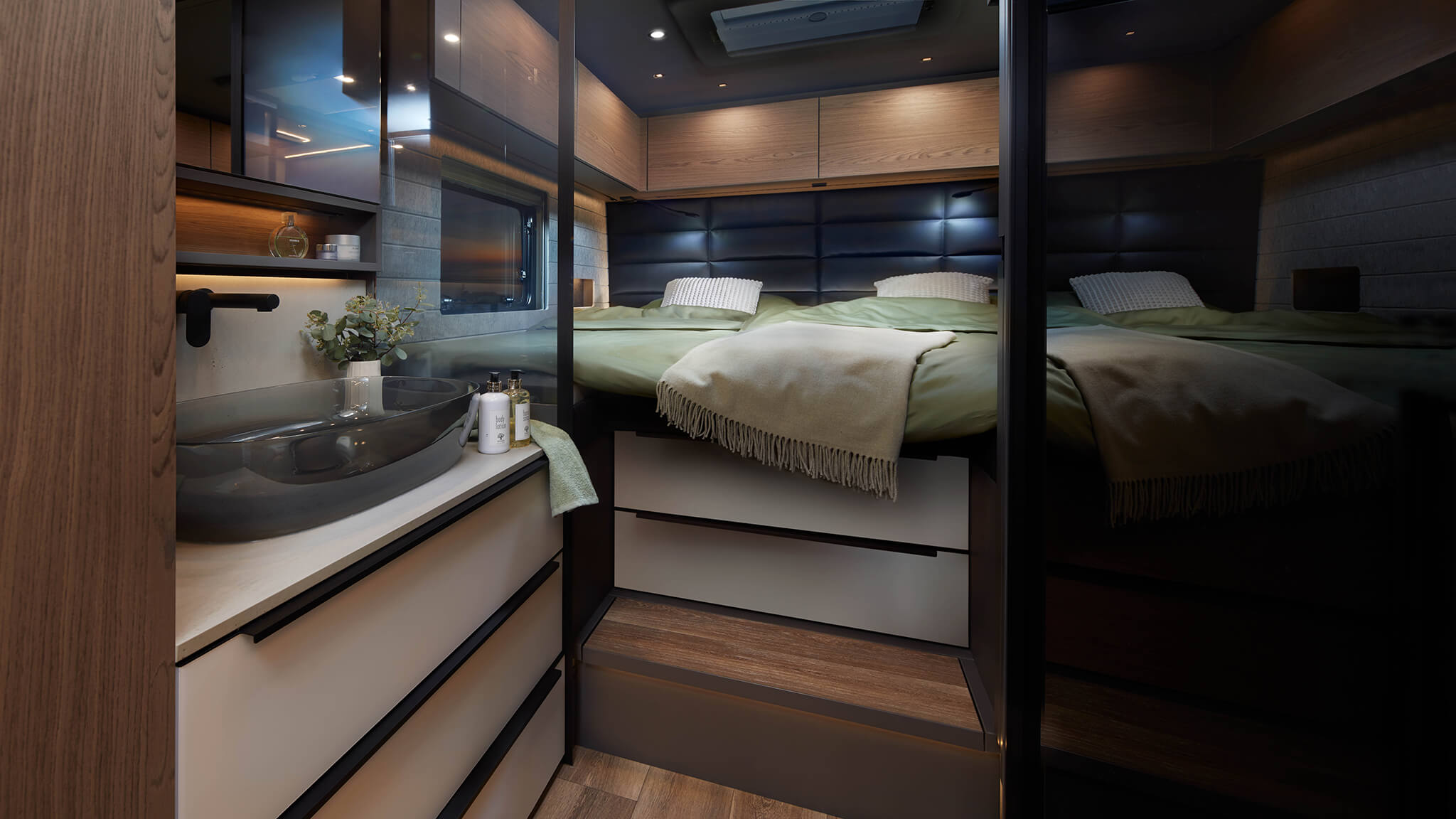 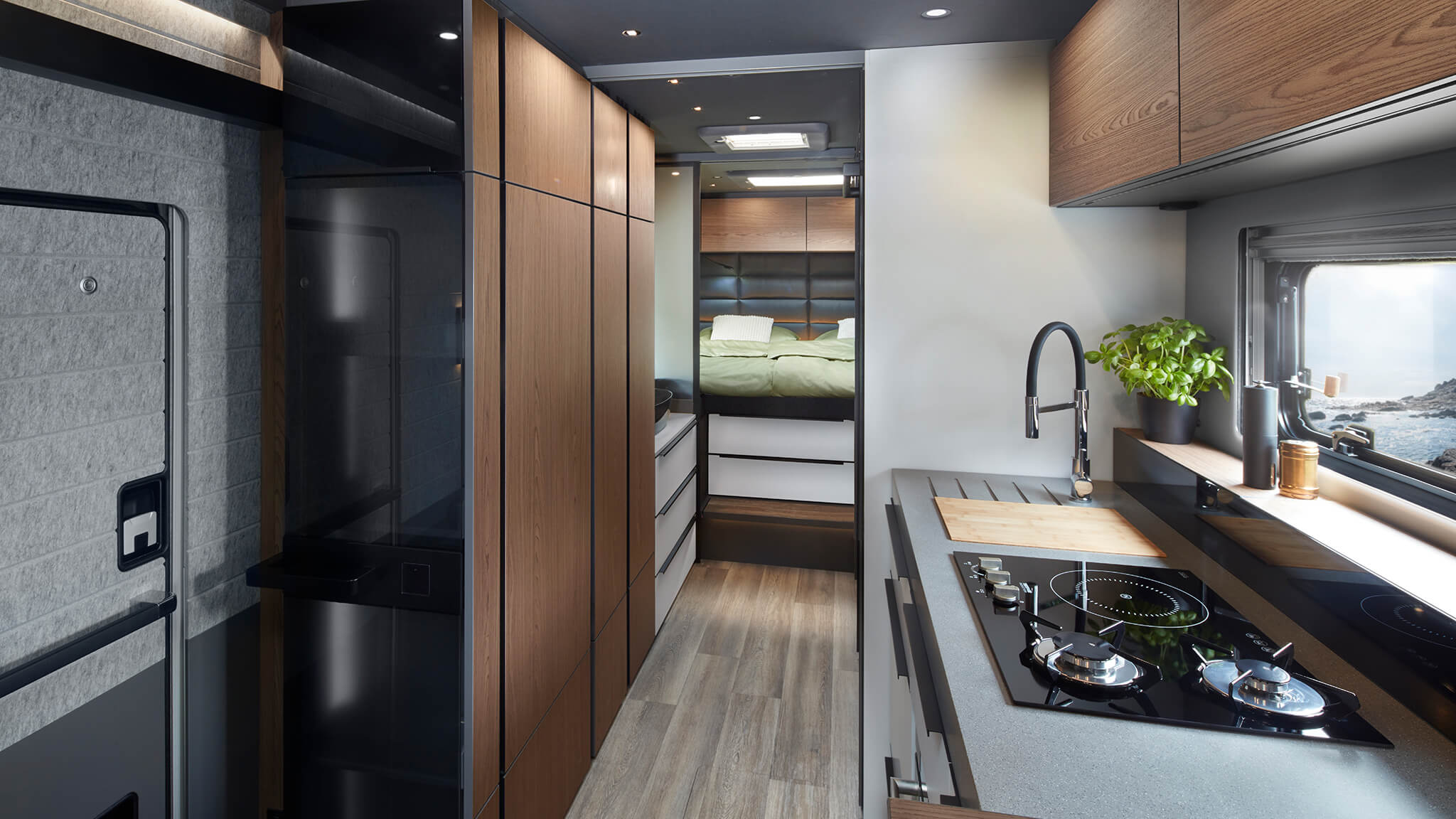 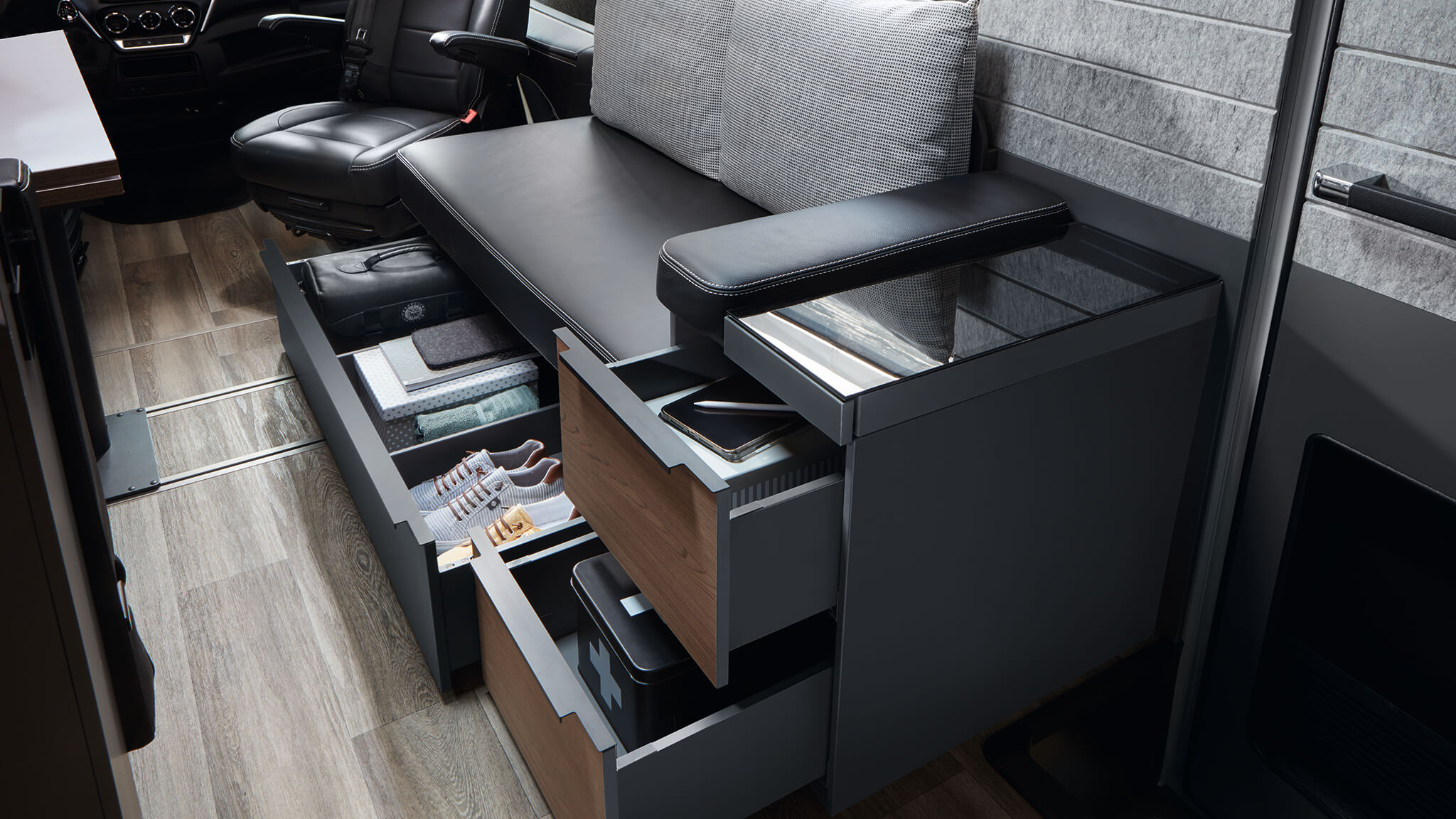 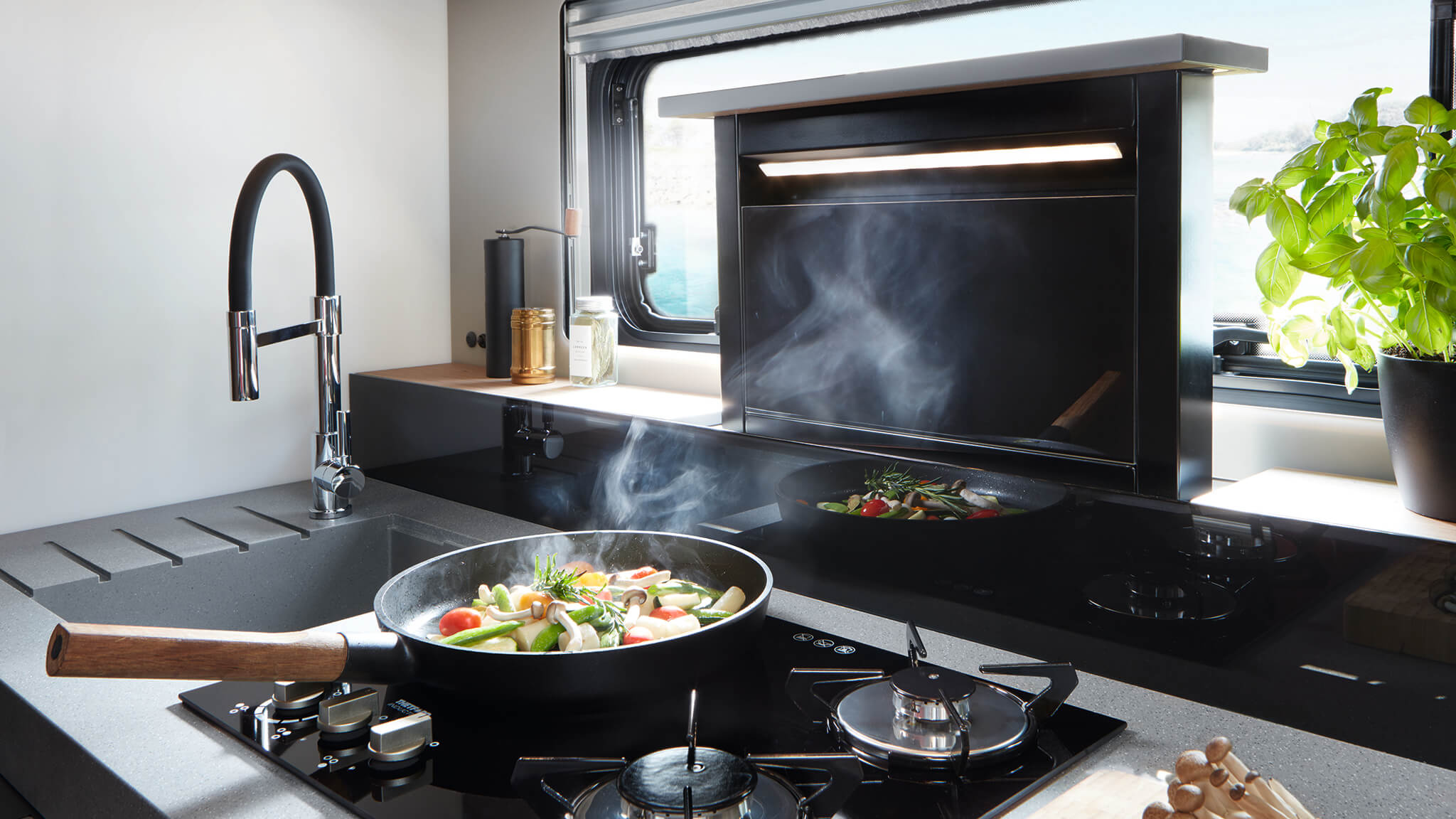 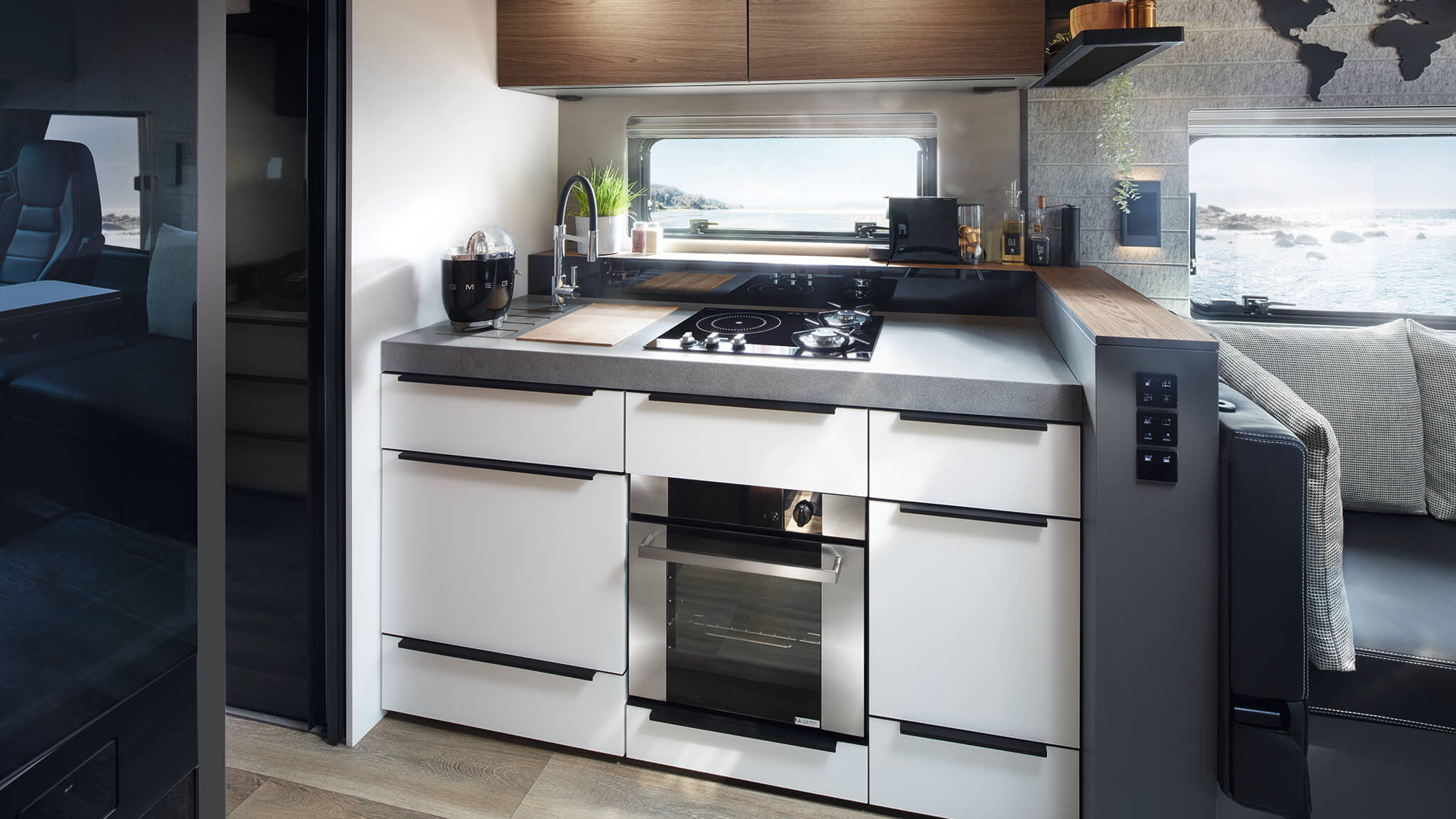 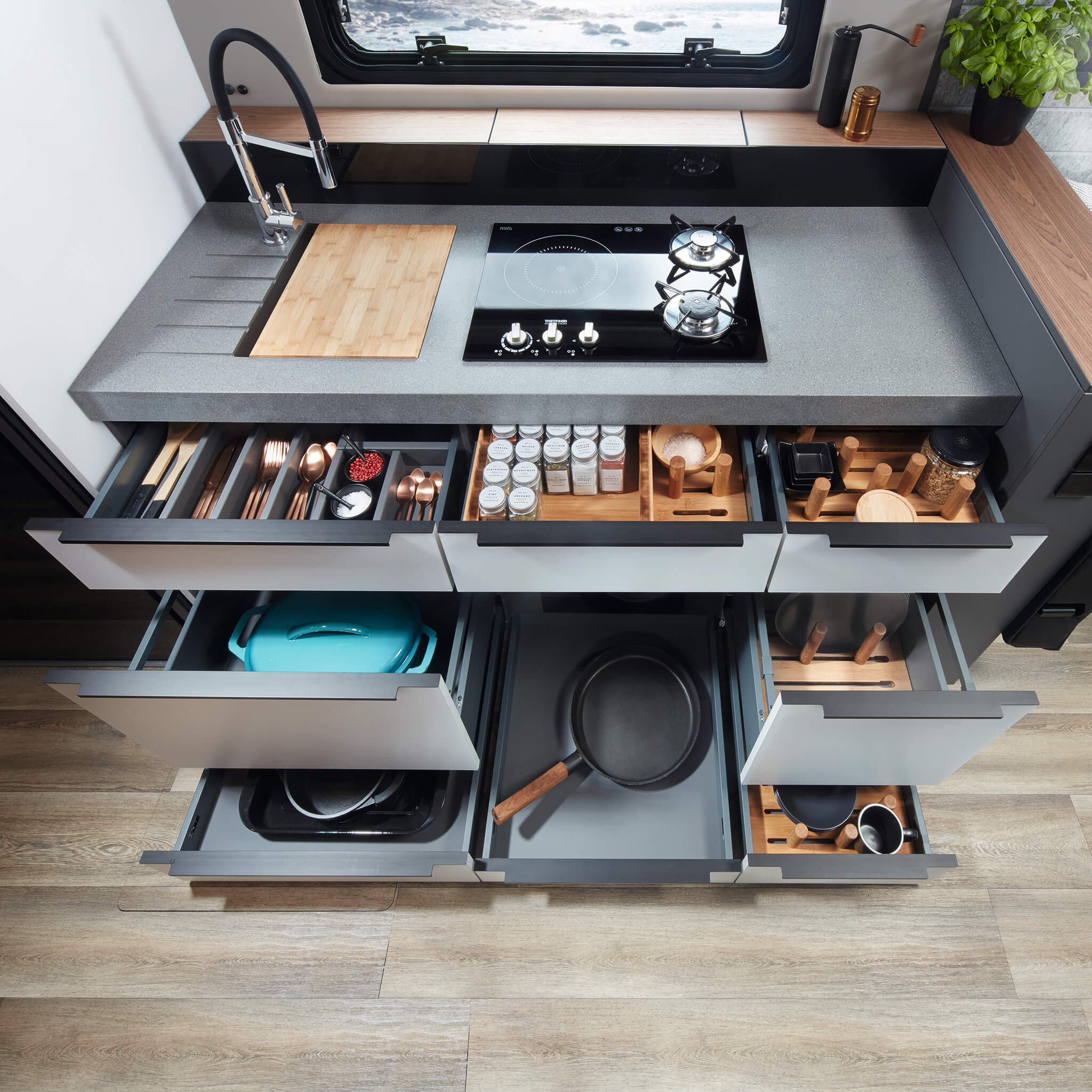 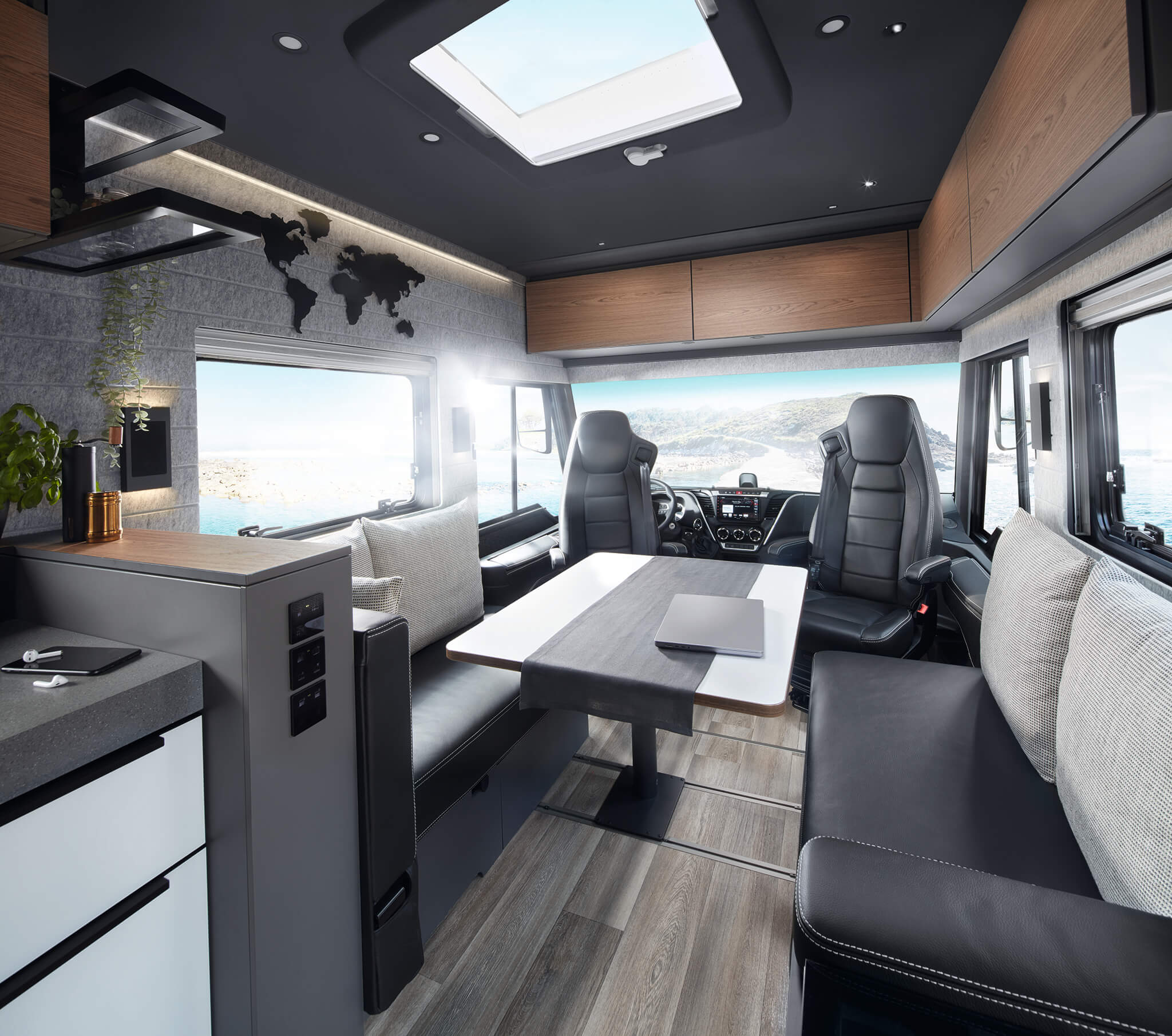 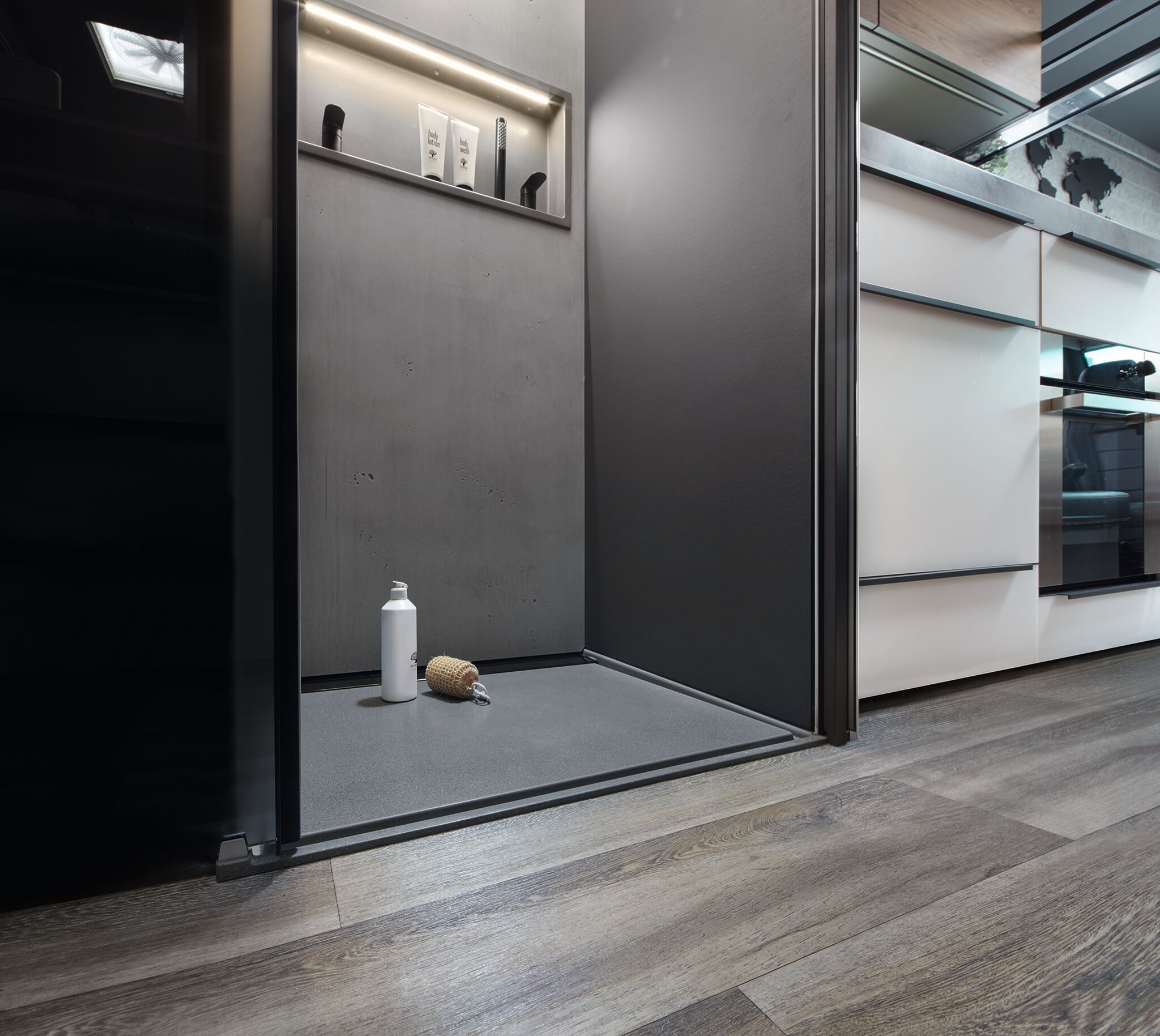